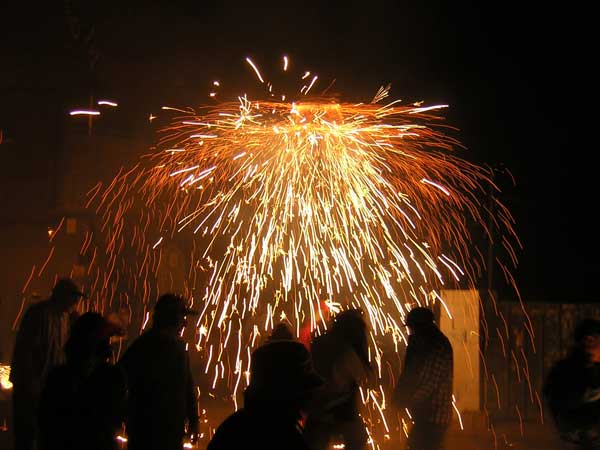 From its beginnings, the Christian community of Beneixama had San Juan Bautista as its owner, and venerated with special devotion the Nativity of the Virgin, celebrating its feasts of June 24 and September 8. Both devotions reflect the memory of the first Christian lords linked to the military order of San Juan.

Both parties have passed inextricably linked in our most ingrained customs and traditions. Although the festival in honor of San Juan Bautista is prior to our festivals of Moors and Christians, soon this party will be linked to the festivities of Moors and Christians held in Beneixama since before 1839. The festival of San Juan is fully consolidated in our population, being the second most important Beneixama party after the patron saints of September.

On the Saturday before June 24 of each year, the four comparsas and filaes (Christians, students, farmers and Moors), participated in a dinner in their respective “masets” and a large entralette runs through the streets as usual. The night ends with the traditional festival of San Juan in a midsummer atmosphere and with great public attendance until dawn.

In the evening of June 23 and as a mark of tradition, Beneixama relives one of its most deeply rooted and traditional days. At dusk and accompanied by the Musical Society “La Pau” the flags of their respective “masets” are collected. Then it is the turn of the Angelus, hoisted of the institutional flags and then the parade of the bonfires will begin. Around 50 bonfires are lit through the streets of the town in an ancestral ritual and followed worldwide on the night of San Juan. The pasacalle will give way to the crowded dinners of relatives, neighbors or friends, who will use the embers of the bonfires, will give a good account of the sausage of the area.

Once the forces are restored and after midnight, the proclamation of the captains for the upcoming Moors and Christians festivities to be celebrated in September is celebrated in the Plaza del Ayuntamiento.

Without pause some, and already entered the dawn, the delegation of new captains goes to the hermitage of our patron so that the new positions to the Divine Aurora are presented. After the anthem to our patron, begins the traditional song of “The aurora”. It is a composed song and premiered on June 24, 1869, with music by Miguel Parra and lyrics by Juan Bautista Pastor and José María Milán, both poets of Beneixama. This song is interpreted in nineteen traditional stops, ending in the parish church almost at dawn.