The origins of the Banda de Música Society “La Paz” of Beneixama go back to the year 1841 when Don Miguel Payá y Rico, who with time would be Cardinal Primate of Spain, had the idea of ​​forming a musical group similar to that of the Band of Albaida, which would act in the festivities of Moors and Christians of Beneixama that year. The name of “La Paz” is granted to him taking into account the integration that supposed of both sides arisen from the first Carlista war.

The Band in 1.920 would be reorganized by Mr. Olegario Pastor Alcaraz, who assumed the leadership until 1978. At this time, the collaboration of D. Manuel and Eleuterio Parra Bernabeu, sons of Beneixama and musicians of the Real Cuerpo de Alabarderos de Madrid Band, who contributed to the creation of a valuable archive, should be highlighted.

In 1.978 the baton D. Pedro J.Francés Sanjuán picks up the local school of music that years later will become a classroom attached to the Villena Conservatory, passing in 2008 to be a new local school where they currently receive more than fifty students This new stage concludes in 1.991, the year in which Alcoyano D. Francisco Amaya Martínez became director until 1993. Since this year, he has assumed the direction of the band D. Antonio Moreno Belda until March 2004, from March 2004 to December 2007 the direction is in charge of D. Ramón García Soler. In January 2008, Mr. Jaume Pascual Sirera, the musician of this company and neighbor of Beneixama, assumed the position.

In the last decades the Music Band Society “La Paz” has experienced great growth, consolidating itself with more than 250 members, participating in numerous festivals in the Communities of Murcia, Castilla la Mancha, Andalucía (Níjar), Galicia (Ribadumia, Pontevedra) and Valencian Community. In 1998 he made his first trip abroad with several concerts in the French Provence.

Noteworthy are the performances in May 2001 at the Romea Theater in Murcia, as a guest band at the Concert for the presentation of the III National Congress of the Festival of Moors and Christians organized by the UNDEF, in October 2003 at the Palau de la Música de Valencia or in May 2010 at the Ruperto Chapí theater in Villena.

In May of 1999, he made his first recording of a CD of festive music, compiling works by composer D. Pedro J. Francés Sanjuán. In 2004 an extraordinary concert was held for Filà Tomasines de Alcoy, recording a CD with songs composed specifically for the Captaincy of the said Filà. In 2006 a CD of military marches was also recorded in collaboration with the comparsa Garibaldinos de Sax. Finally, in November 2010, 14 slow marches are recorded coming from the legacy contributed by the “Parra”, from the Real Madrid Band of Alabarderos. Having the same an incalculable historical and musical value.

During 2007 the collaboration in concerts of the band with prestigious soloists such as the pianist Ángela López Lara or the soloists Antonio Lozano, Boni Carrillo or Estela Climent stands out.

In 2008 he held a multidisciplinary concert as the opening of the Plaça de la Torre, “Quant music is easy” with the participation of many associations of the population, this concert will be followed by others in summer with a variety of themes, ballroom dancing , jazz etc

At present the band has a staff of 70 musicians and its director is Jaume Pascual Sirera. 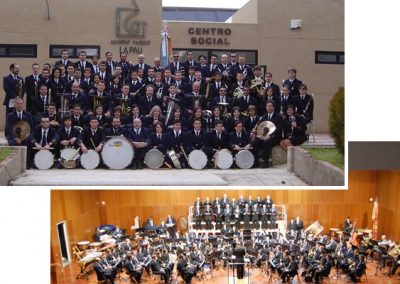